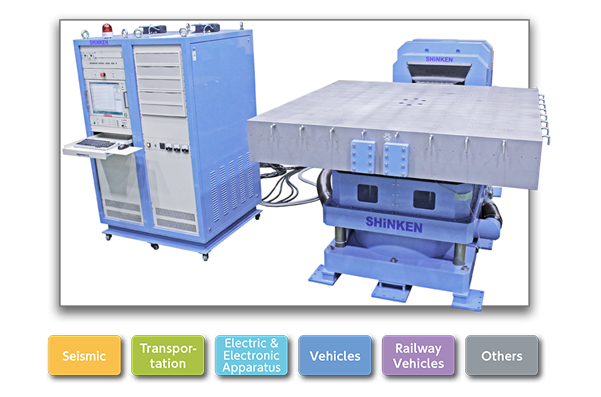 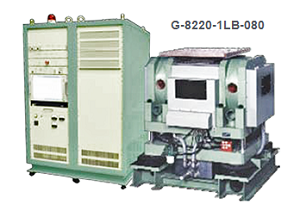 SHINKEN 2-axis Vibration Generators(VGs) have a common table for both horizontal and vertical excitation, thus making the space needed for the VGs smaller than the conventional single-axis VGs which require two tables; especially VGs with large tables.

As it is said that vertical and the so-called ‘Major Horizontal’ excitation can precipitate over 90% of the hidden flaws, 2-axis simultaneous excitation can be a cheaper solution.

In addition to 2-axis Simultaneous VTSs, 2-axis Sequential VTSs, only capable of testing axis by axis with one-touch switch-over or optionally available automatic series tests (in order of Z→X) are also available.

Also available are LB-type 2-axis Vibration Test Systems with the table size* changeable later, different from the HT- and LT-type. *But the size being limited with the VG’s size. 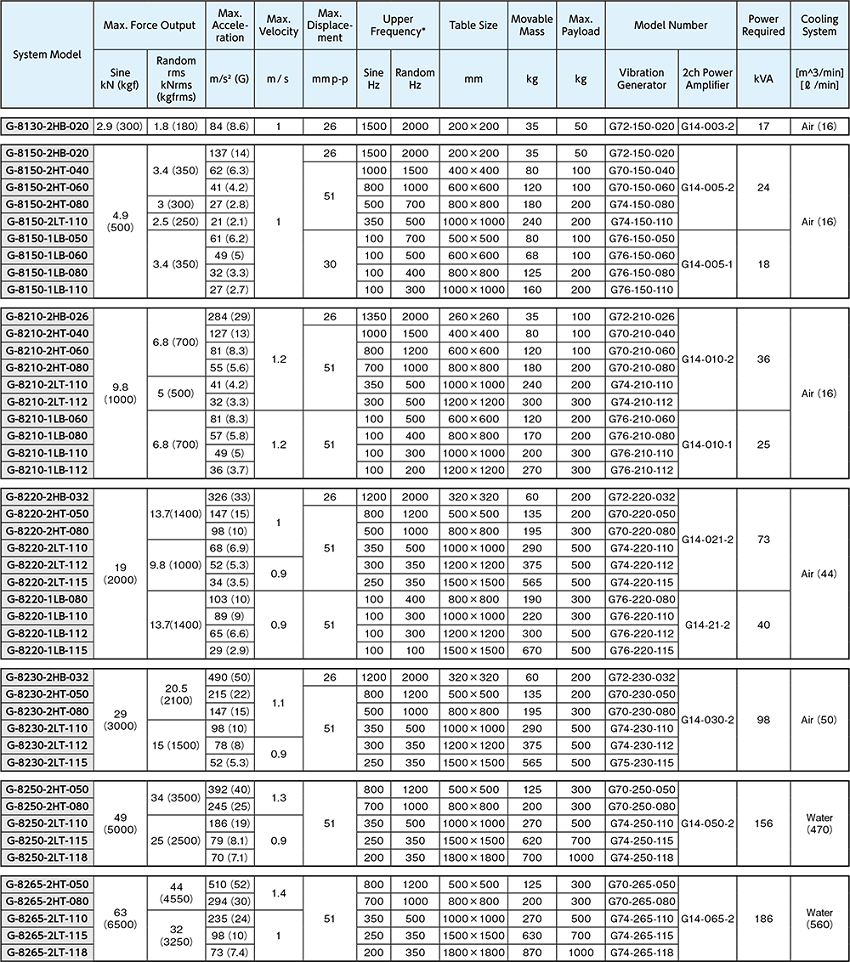 1. The upper frequency for sine is a frequency up to which the max. force output can be achieved, while that for random is a frequency
up to which a PSD random pattern having a -6dB/oct or steeper roll-off over the upper frequency for sine(or lower) can be controlled.
The lower frequencies for control and for excitation are 2Hz and 0.5Hz, respectively unless especially requested.
2. All the Power Amplifiers are of an air cooling type.
3. The HT and LT type systems having a max. force output of 2.94kN(300kgf), 6.86kN(700kgf) or 19.6kN(2,000kgf) are also available.
4. With the employment of the 1-ch Power Amplifiers instead of the 2-ch Power Amplifier, the 2-axis (Automatic) Sequential Vibration
Test Systems are also available, which can be upgraded into the Triaxial Simultaneous Vibration Test Systems in the future by adding
1-ch Power Amplifiers and necessary controllers.
5. Vibration Generators with other table sizes than shown above are also available upon request.
6. Power required is 3-phase 200/220/380/415V, 50/60Hz.
7. For better acceleration distribution on the table, the movable weight will be heavier by 10 to 30kg for addition of proper balance
weights.
8. For the G-8230 (29.4kN), air-cooled systems are available upon request.
9. For the air-cooled systems, it is recommended that the hot air from the cooling blower be sent to outside.
10. A System having a bigger force output and/or larger displacement than shown above is also available upon request.

We use cookies on our website to give you the most relevant experience by remembering your preferences and repeat visits. By clicking “Accept All”, you consent to the use of ALL the cookies. However, you may visit "Cookie Settings" to provide a controlled consent.
Cookie SettingsAccept All
Manage consent

This website uses cookies to improve your experience while you navigate through the website. Out of these, the cookies that are categorized as necessary are stored on your browser as they are essential for the working of basic functionalities of the website. We also use third-party cookies that help us analyze and understand how you use this website. These cookies will be stored in your browser only with your consent. You also have the option to opt-out of these cookies. But opting out of some of these cookies may affect your browsing experience.
Necessary Always Enabled
Necessary cookies are absolutely essential for the website to function properly. These cookies ensure basic functionalities and security features of the website, anonymously.
Functional
Functional cookies help to perform certain functionalities like sharing the content of the website on social media platforms, collect feedbacks, and other third-party features.
Performance
Performance cookies are used to understand and analyze the key performance indexes of the website which helps in delivering a better user experience for the visitors.
Analytics
Analytical cookies are used to understand how visitors interact with the website. These cookies help provide information on metrics the number of visitors, bounce rate, traffic source, etc.
Advertisement
Advertisement cookies are used to provide visitors with relevant ads and marketing campaigns. These cookies track visitors across websites and collect information to provide customized ads.
Others
Other uncategorized cookies are those that are being analyzed and have not been classified into a category as yet.
SAVE & ACCEPT

You can find out more about which cookies we are using or switch them off in settings.

This website uses cookies so that we can provide you with the best user experience possible. Cookie information is stored in your browser and performs functions such as recognising you when you return to our website and helping our team to understand which sections of the website you find most interesting and useful.

Strictly Necessary Cookie should be enabled at all times so that we can save your preferences for cookie settings.

If you disable this cookie, we will not be able to save your preferences. This means that every time you visit this website you will need to enable or disable cookies again.